Keri posted some awesome photos from our apple pressing adventure. Thought I would add some notes about the day. Rusty found a local press owner that was willing to rent their press to us for the day. We picked it up the night before to test it out to make sure we thought we could press all of the apples we had. We guesstimated that we had roughly 250 lbs or 115 kg of apples.

During our test trials we pressed apples in bunches of 50 and measured the yield. From 50 average sized apples, we were getting roughly 3.5 litres. But when we got down to pressing the apples, we decided to put the apple pulp through a second pressing and in the end, we ended up with about 60 litres, or 60 kgs, of juice. So we were really getting more like 5 litres of juice per 50 apples.

The press itself is actually a grinder and a press. It has a hand cranked mulcher which takes some getting used to. After some experimentation we discovered that it was easier if one person pushed the apples in with a spatula while another person cranked. The resulting pulp was made up of pieces of apple that were pretty small, say about the size of pencial eraser but more oddly shaped. This is a really important step and when we tested some bigger chunks that snuck through we noticed that they weren’t juiced very well. Definitely the smaller the pulp pieces are, the better.

We soaked the apples just prior to pressing them in a pail of water and cut off any truly disgusting bits that looked like maybe they were insect eggs. One of our compatriots brought over some four-litre pails for collecting the juice. This worked fairly well but we were canning the juice as were pressing it due to a lack of jar and pail capacity. Looking back I think it would be easier to seperate the two processes and just press everything at once and store it in giant pails in a cold dark place and then can it at our leisure. But if you don’t have the pail capacity, canning as you go works too. The larger jars are definitely better!

We tried cutting the apples into pieces but in the end it was easier to just put them in whole. We created an apple-quince blended juice and we did have to cut up the quinces because they were bloody hard to grind to pulp. The quinces also created a kind of bubbly, frothy residue that we strained out. The apple juice itself was remarkably clear and beautiful. We also tried adding some grapefruits. We didn’t bother to cut these up. We just put them straight in and they burst like frickin water balloons! So yummy.

we added about 5 kgs of quince and 2 grapefruits, which aren’t included in the figures 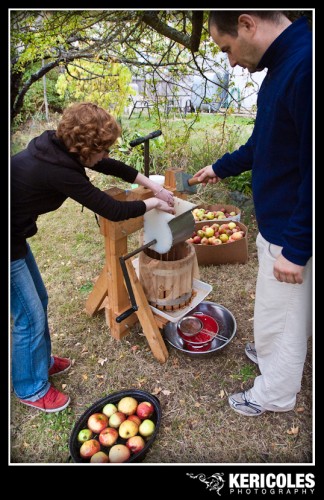